We love winter in Tuscany.  We arrived home in early December with snow flakes falling.  A frosty white world greeted us in Pieve dei Monti di Villa and we were no sooner there than we were walking up the cobbled street paths of the next little village upwards, Monti di Villa, to see a Presepe Vivente (Live Nativity).  The whole village had partaken in the event, setting up their cantinas to represent old shops, iron mongers, leather workers, carvers, broom makers. weavers, bakers…

It was freezing cold, but in the streets, fires burned merrily in big iron tubs, and there was the occasional ‘camp’ fire out in a yard over which hung a big pot of mulled wine. The local villagers wore medieval costume and sang folk songs, and as we wove our way up the hill we ate homemade bread and cheese and pizza slices and biscuits, and drank cupfuls of warm sweet red wine.

At the top of the hill with spectacular vistas was the live nativity with a live baby cuddled up.  And fireworks representing the three stars.  It was gorgeous. We felt so happy to be home.

Christmas, New Year, family, friends and celebrations.  It has been a wealth of fun and love.  There have been long walks and talks in the bright cold sun walking along the mountain roads and tracks from village to village, from Pieve dei Monti di Villa to Montefegatesi,  through the snow, the sky startlingly blue on all that white. And when the snow melted recently, we have continued walking up there in the magical mystical woods, through the mists hiding one tree from another, finding our pine cones for the fire, arriving back at the little house with our noses bright red, jumping up and down as we light a fire and organize the soup to be. 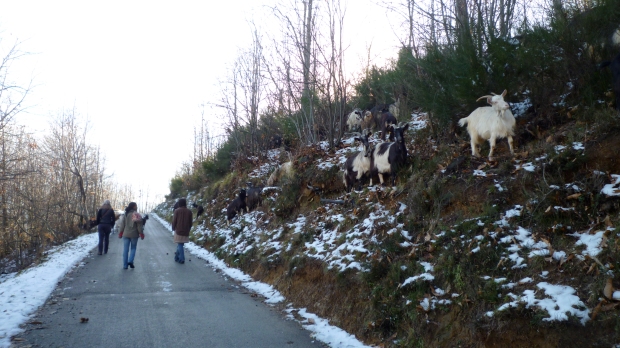 The beautiful photographs taken of the the Presepe Vivente were taken by Maureen Halson of http://www.labalconata.com

We are international artists. View all posts by Nunan-Cartwright artists