Shanghai is such a crazy place.  It is a huge city, the biggest in China.  Its population is close to 20 million people.  Taking a taxi across town is not easy and can take hours just negotiating all the road systems and sitting in endless traffic. We like it here though, as all the little areas within the city seem to create a sense of community.

On our arrival, we had the good fortune to stay with Mike’s niece and her husband who both work with Nike.  Through their efforts, we were able to negotiate with a driver of a very comfortable Buick, to take us to two foundries for the following day.  They were each on different sides of this massive city.  It was to be a gargantuan expedition crossing that labyrinth of roads and traffic and then finding the foundries in tiny obscure areas in the industrial back blocks.  The first one was out past the old Hongqiao Airport and the second one was out somewhere near the new Pudong airport.

We have done some work with the first foundry before.  They are really lovely people and there was no problem with them shipping the work for us outside of China.  However nobody speaks English and so all the translation was done through the generous good will of a Dutchman whose Taiwanese wife gets a lot of her sculptures cast there.  It’s a big important foundry that does huge jobs.  It’s nothing for them to do 20 metre sculptures and there is heaps of work for them in China.  They model the work up from the maquette for the artists too if it is wanted.  The foundry process is pretty good here even though a lot of the preliminary processes are basic, relying on lots of human labour rather than technique.  The bronze is good quality; we used silicone bronze but there is a choice of other metals as well as the cheaper handmade-up bronze; the welding and chasing is fine, though it is best to be there when they are doing it.  They can pour massive sizes at a time with their giant crucibles and this is a real plus as there are less seam lines. The wax room isn’t wonderful but the workers are pretty good at the cleaning up and sprewing of the waxes. The moulds are ok, they do the job, just not the most recent technology.  They like to make a resin cast  for sandcasting which they are really proficient at and they also do the lost wax method.   The patination is ordinary, especially compared to the foundries we use in Pietrasanta, lots of reddy brown highly glossed sculptures, the green patinas are ok, just undeveloped.  We were pretty fussy about the chasing and ended up doing the patination ourselves.  Very sweet people to work with nevertheless, and they learn fast, its funny how you can get by mostly with sign language.

Michael and I stayed out here for several weeks at a time a couple of years ago, getting four big bronzes cast for Saudi Arabia.  There is quite a respectable hotel around the corner with seriously hard Chinese beds and an attached restaurant.  We are really out in the whoop whoops here, so we found ourselves under constant observation and interest from the local people.  It was great in some ways.  The streets were spotless, cleaners came along everyday and washed down the pavements including the rubbish bins, shining up all the stainless steel.  The guys would walk along in pairs and threesomes with their shirts rolled up over their bellies and tucked up under their arms.  And it was quiet as there was very little road noise with most of the traffic being electric motor bikes.  Of a night there would be this old tinny music on the loudspeakers, put on in a little square and everyone would be out there dancing, it was all a bit random, girls dancing with girls, courtly old men with their tiny elegant wives gracefully circling the jostle.  We had a great sense of delight in the feeling of the community being together.  It wasn’t easy though.  The food was pretty tough to get used to as there is very little that has been westernized out in the sticks and no matter how hard you try you can’t get anything without pork or some gristly thing in the middle of it all.  One morning at breakfast we asked for their best coffee, it was very expensive.  It arrived looking lethally strong and black with this fatty, creamy looking swirl in the centre.  Mike stirred his and the swirly substance fell stringily from his spoon as he raised it.  It was a raw egg in the coffee. It was a bit much for first thing in the morning so we left the hotel and went to the local grocer, buying yogurt and biscuits for brekky instead. So, here we are back again, and getting prices from Mr Liu for some large projects.  He promises to email the results, and in the end the pricing is about the same as the next foundry we go to.  It just becomes a matter of preference for their procedures.  For interest sake, the name and address of this foundry is:  Shanghai Guangyi Sculpture Casting Co. ltd, China.    No 24 Xin Hunag Rd.  Shanghai, PR China.  Tel : 86-21-69581968    fax: 86-2169581969

After this foundry and a tour nearby of our friend’s immaculate studio in an industrial park, we wound our way back through the spiral of roads of Shanghai to the Pudong side. The next foundry, I found on the internet and they are linked in partnership to a foundry in Switzerland.  I thought this association might be very good recommendation for the quality of workmanship and particularity. When we contacted them, we got a reply in english and it turns out that several people in the foundry speak english. Easy peasy.   A lovely girl took us on a tour of the factory and everything was spotless and tidy and very organized.  They use silicon bronze, which was our requirement for these jobs, but also brass and aluminium.  All the materials are excellent quality and the engineering structures inside some of the large works were top quality stainless steel.  The wax studio was immaculate.  The mould making was a little old school, not as advanced as Italy, but good nonetheless, using silicon rubber.  The patinas were better in this foundry.  We had the maquettes of the sculptures we wanted to get cast in larger sizes and the girls in the office sat down and measured the sculptures using exact formulas, a system used by one of the foundries we use in Pietrasanta (Fonderie Versiliese), to get the exact amount of bronze in the piece.  The formula gave an almost identical price to the one that Mr Liu gave, using just his eye and the years of experience to come up with.  We felt really happy with this last foundry, probably because the workshops were so tidy, we could speak english without having a translator, and the quality was as good if not better than Mr Liu’s foundry.  It just remains to be seen now, on more logistics involved with the projects whether we will go ahead this time with the project and with which foundry as both have a lot going for them.  For interest, this last foundry is called: Sainteen and their website is http://www.chinaartcasting.com

I’ll do an update when we get the casting done. 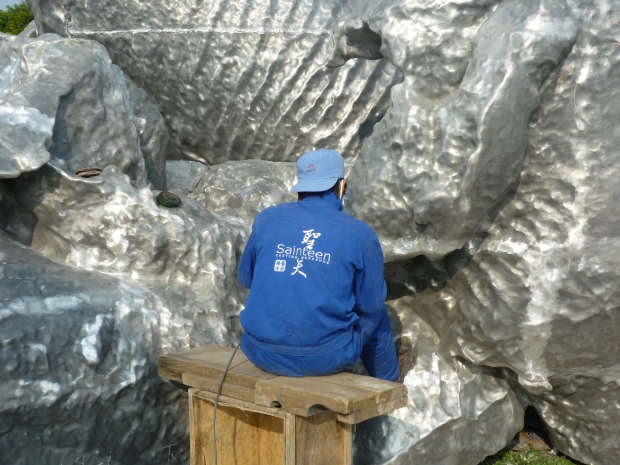 We are international artists. View all posts by Nunan-Cartwright artists